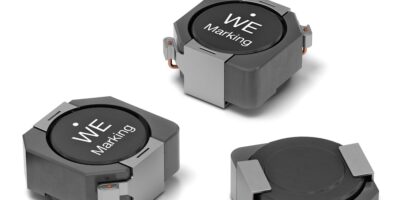 Expanding the WE-PD family of magnetically shielded SMT-mountable storage chokes, Würth Elektronik has introduced the WE-PD 1260 P storage choke. It is claimed to have the market’s highest ferrite-based saturation current and a low among its market competitors and is characterized by a low DC resistance (RDC).

The P in WE-PD P denotes performance and the 1260 refers to the package. The MnZn core is responsible for the high ferrite-based saturation current and the choke is characterised by a low RDC. WE-PD P is suitable for switching frequencies up to 5MHz and is AEC-Q-200 qualified.

The WE-PD-family storage chokes is for used in integrated DC/DC converters and switching controllers with output powers from 0.01 to 300W. The inductors help to raise the efficiency of switching controllers to over 95 per cent, adds the company.  The Standard and Robust series have a NiZn core while the Performance variant, which has the MnZn core, attains even higher saturation current values for the same component size.

Another feature is the wide operating temperature range of -40 to +150 degrees C. Depending on the required inductance value, WE-PD 1260 P is available in 18 variants of the E6 series from 1.5 to 1000 microH.

The WE-PD 1260 P is available from stock in all inductance value variants without a minimum order quantity. Free samples can be requested.