White chip LEDs save space in IoT devices and drones 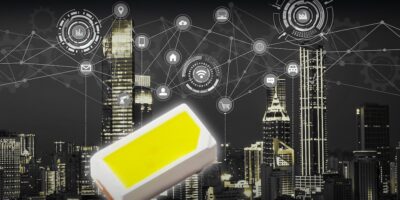 High luminous intensity (2.0cd) white LEDs are being increasingly adopted to improve visibility in a range of applications in the consumer electronics and automotive sectors. At the same time, the emergence of applications that mount multiple LEDs in a small space – for example IoT devices and drones – require high density mounting. This makes it difficult to achieve high brightness in a compact footprint, explains Rohm.

Colour variation is significantly improved, simplifying the colour adjustment process by ensuring accurate white colour chromaticity, says Rohm. This contributes to space savings, but also improves design flexibility along with visibility through high density mounting of high luminosity LEDs. Qualification under the automotive reliability standard AEC-Q102 is specifically developed for optical devices is planned, enabling a smooth application inside industrial equipment and automotive applications that are exposed to harsh environments.

Rohm is committed to expand its line up of 1608 size white chip LEDs from low to high brightness.

Rohm Semiconductor develops and manufactures a large product range from SiC diodes and MOSFETs, analogue ICs such as gate drivers and power management ICs to power transistors and diodes to passive components. The company has manufacturing plants in Japan, Korea, Malaysia, Thailand, the Philippines, and China.