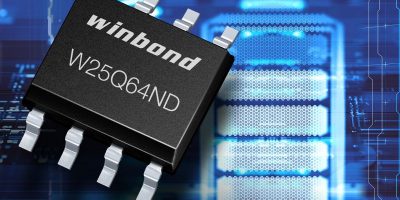 The power-saving benefits of Winbond’s 1.2V W25Q-ND series of SpiFlash memory products are being brought to a wider range of applications as the company introduces larger memory capacities.

The 1.2V SpiFlash products offer typical normal mode and standby mode power savings of 33 per cent compared to equivalent NOR flash devices running from a 1.8V supply. Market demand has been led by manufacturers of wireless and battery-powered devices, in which the low power operation of the 1.2V SpiFlash memories complements other technologies such as the Bluetooth low energy short-range wireless networking protocol.

The company has also introduced automotive grade NOR slash products, and an extended-temperature range of high-performance serial NAND flash products.

Automotive grade devices, the W25Q512JV (512Mbit density) and the W25Q01JV (1Gbit) will be available in the first half of 2019 in temperature grades 3 (up to 85 degrees C), 2 (up to 105 degrees C) and 1 (up to 125 degrees C). The high-density parts are suitable for use in safety-critical applications that have a large code base, such as infra red cameras in advanced driver assistance systems (ADAS), and V2X communications systems.