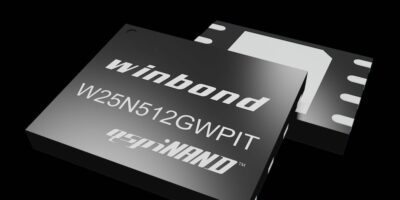 The latest version of Winbond Electronics’ flash memory is the QspiNAND and it is designed for use with the Qualcomm 9205 LTE modem.

Claimed to be the industry’s first 1.8V, 512Mbits (64Mbytes) QspiNAND Flash, it offers the right density for designers of new cellular NB-IoT modules, says Winbond. It is suitable for automotive and IoT applications where NB-IoT is expected to increase as connectivity rises.

The QspiNAND flash extends Winbond’s reach from traditional QSPI-NOR flash to QSPI-NAND flash memory, giving customers the choice of code storage feature set to expand with minimal cost. It is able to use the same six pin signals and QSPI command set for SLC NAND flash densities without compromising performance by using the new continuous read feature at 104MHz read speed. Continuous read allows for efficient access to the entire memory array with a single read command that is particularly suitable for code shadowing applications.

Data retention is above 10 years.

The QspiNAND flash operates from a single 1.75 to 1.95V supply and has active current of 25mA and 10 microA in standby mode and just one microA in deep power down mode.

The industrial grade versions has an operating temperature range of -40 to +85 degrees C and the automotive version operates at -40 to +105 degrees C.

Qualcomm Technologies has tested and qualified the Winbond QspiNAND Flash as a stacked known good die (KGD) with the Qualcomm 9205 LTE modem.

W25N QspiNAND flash family devices are offered in space-saving eight-pin packages which was not possible in the past for typical SLC NAND flash memory, points out Winbond. The W25N512GW is a 512Mbit memory array organised into 32,768 programmable pages of 2,112 bytes each. W25N512GW provides a new ontinuous Read mode that allows for efficient access to the entire memory array with a single Read command that is ideal for code shadowing applications.

The QspiNAND flash memories are manufactured in the company’s 12-inch wafer fabrication facility in Taichung, Taiwan.