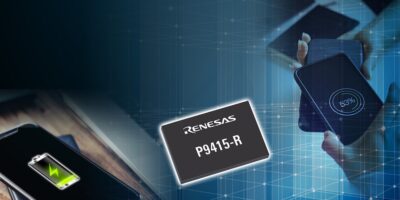 Renesas Electronics has added the P9415-R wireless power receiver to its portfolio. The 15W receiver uses WattShare technology and enables smartphones, power banks, and portable industrial and medical equipment, to wirelessly charge other mobile devices and accessories that also have wireless charging capabilities.

The P9415-R features up to 5W of transmit power capability in transmitter/receiver (TRx) mode, as well as receive up to 15W on Qi transmitters, enabling quick and convenient mobile device charging on the go.

Renesas believes the P9415-R will bring WattShare technology to a wider audience. It combines receiver and transmitter capabilities, allowing smartphones, smart watches, wireless ear buds and other devices to be wirelessly charged simply by placing them on top of a smartphone or other industrial and medical portable devices.

In WattShare TRx mode, the P9415-R enables these mobile devices to change the power flow direction and deliver up to 5W of power to charge other devices. Customers can use the same wireless power coil and same P9415 circuitry to both receive and transmit power wirelessly.

It receives up to 30W in proprietary mode and has under voltage lockout down to 2.7V which increases the available charging area and connection times. Sensory accuracy has been improved compared with earlier devices in Renesas’ wireless portfolio to increase foreign object detection capabilities.

Renesas produces both the power receivers (PRx) used in smartphones and other applications, as well as the power transmitters (PTx) used in charging pads and automotive in-car applications.