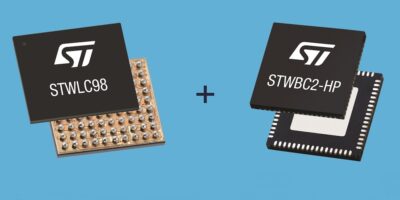 Faster wireless charging and flexible charge sharing can enhance the use of portable and mobile devices for use in the home, office, industry, healthcare and in-car applications. The STWLC98 integrated wireless power receiver can be combined with the STWBC2-HP transmitter for a transmit-receive system capable of delivering

STMicroelectronics says that the STWLC98 can fully charge high-end smartphones, which contain high-capacity batteries, in just under 30 minutes. It can also be used for fast and convenient contactless charging, freeing the user from the restrictions of cables, sockets, and restrictive connections and allowing the designer to simplify enclosure designs, reduce cost and complexity and implement slimline styles, says the company.

The STWLC98 features ST’s proprietary Adaptive Rectifier Configuration (ARC) mode that enhances the ping-up and power transfer spatial freedom of the system in both horizontal and vertical directions without any change in hardware or coil optimisation. Enabling ARC mode, which transforms the whole surface of the transmitter as usable charging area, increases the ping-up distance by up to 50 per cent in all directions, says ST.

The STWLC98 can also operate in high-efficiency transmitter mode to allow high power charge sharing between devices. Coupled with the STWLC98’s embedded Q-factor detection – believed to be the first in a receiver device, it ensures safe operation in transmitter mode.