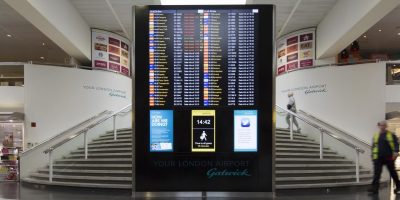 Legacy FID systems require software to be loaded on a separate PC behind the screen to run them – whereas the airport’s 1,200 cloud-based screens now connect via a web browser from any operating system. This takes up only 3Mbps of bandwidth – so the new real-time system is extremely fast and responsive to updates – which is key in times of disruption.

The new system – VisionAir – can also run natively on smart TVs – saving on infrastructure and maintenance costs, and demand on engineers’ time. The new system is also:

·  Flexible – and can run from an internet browser or a mobile device and does not require any software installed.  Content can also be managed collaboratively with other organisations –      such as airlines and ground handlers – and different types of content can be hosted depending on requirements – disruption, weather, advertising etc – from the smallest mobile devices to the largest video walls.

·  Resilient – unlike legacy systems – the system is more robust to network blips or power failures with mobile battery power and 4G backup available if required. It also includes a fully independent management interface that supports operation completely independent from any airport infrastructure or system if required.

·  Intelligent – system has awareness of screen positions with respect to the airport layout and can target appropriate messaging depending on the situation.

The VisionAir project started back in 2015 when Gatwick Airport decided to develop cloud-based FIDS in line with the airport’s cloud migration strategy. AirportLabs developed the solution and the system went live with 1200 screens by the middle of 2017 and has been providing uninterrupted service since then.

“Our vision was to develop a new generation system that is reliable, scalable and accessible from anywhere. We are the first major airport to introduce a cloud-based Flight Information Display System and the solution we now have in place is resilient, flexible and low cost with highly optimised data transfer.

“The VisionAir system is just one of many exciting digital initiatives our award-winning digital team is developing.  We are transforming the way airport information is communicated and will soon allow passengers to interact with chat bots using Facebook Messenger, Whatsapp and other popular apps.  We are also exploring the use of the Internet of Things for improving situational awareness, machine learning for accurately predicting flight departure times and recently became the world’s first airport to deploy augmented reality wayfinding.”

“AirportLabs built VisionAir to be a real time passenger communication platform that covers all types of messages. Gatwick was the first to recognise the potential of having such a channel and embrace it. Working with the airport, the rollout has been swift and painless in spite of the complex environment with very tight operational constraints.

“VisionAir has also been very well received by the airlines, ground handlers and other stakeholders which now have a state of the art tool that ensures effective communication with the passengers- irrespective of an advertising, business as usual or disruption scenario. It is projects like this which form the building blocks for the next generation travel experience and bring further gains even to the most efficient operations. We are very happy work with an airport like Gatwick who are ready to step with us into the future and change the face of terminals and travel.”