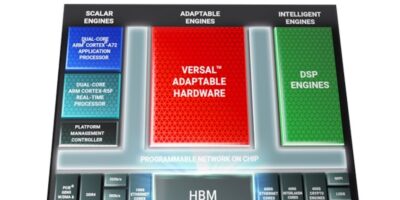 The latest in Xilinx’s Versal ACAP series, Versal HBM, is claimed to deliver fast memory, secure connectivity and adaptable computing. The adaptive compute acceleration platform (ACAP) has high bandwidth memory (HBM) and is intended for used in data centres and by network operators.

According to Xilinx, the Versal HBM ACAPs integrate the most advanced HBM2e DRAM, providing 820Gbyte per second throughput and 32Gbyte of capacity for eight times more memory bandwidth and 63 per cent lower power than DDR5 implementations. The Versal HBM series has been designed to address the increased memory needs of compute intensive, memory bound applications for data centres, wired networking, test and measurement, and aerospace and defence projects.

The IP suite means that the ACAP can address multi-terabit network connectivity for a breadth of protocols, data rates, and optical standards, despite being an off-the-shelf solution which can reduce time to market.

The Versal HBM series will begin sampling in the first half of 2022. Documentation is available now and tools will be available in the second half of 2021 via an early access program.