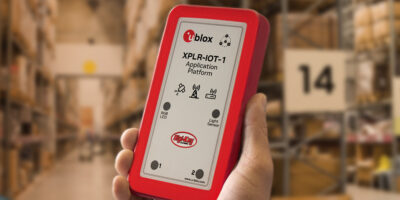 End-to-end proofs of concepts for IoT products and applications can be tested, evaluated and validated using the XPLR-IOT-1 kit from u-blox.

The package all relevant u-blox technologies and services into a prototyping platform with a selection of sensors and interfaces as well as cloud connectivity. u-blox introduced it because the increasing complexity of IoT devices has elevated the importance of prototyping and validating designs before full production begins. For example, designs often require satellite-based positioning, Bluetooth low energy, Wi-Fi, and cellular connectivity which can be via LTE-M, for example. As a result, demand for multifunctional application boards is increasing over and above that for evaluation kits, to comprehensively test a product’s entire feature set, reported u-blox.

The XPLR-IOT-1 gives users everything they need to prototype low-power IoT use cases, such as logistics container trackers, industrial automation, sensor-to-cloud applications and fleet management, claimed u-blox. The board’s u-blox NORA-B106 Bluetooth LE 5.2 radio module doubles as its main microcontroller, hosting the application software and controlling the other modules. These include a u-blox SARA-R510S for LTE-M and NB-IoT cellular connectivity with built in cloud security, as well as a u-blox NINA-W156 for 2.4GHz Wi-Fi.

The hardware is complemented by a broad selection of sensors commonly used in IoT applications, including accelerometers and gyroscopes, a magnetometer, and temperature, humidity, pressure, and ambient light sensors. A power-on switch, LEDs, and user buttons make it easy for users to interact with the device.

The NORA-B106’s powerful Arm Cortex-M33 microcontroller is solely dedicated to running the application software. It is clocked at 128MHz and has 1Mbyte of embedded flash and 512kbyte of RAM and 8Mbyte of external flash memory. There are also integrated antennas for all featured technologies, a USB interface and USB charging, a Sparkfun Qwiic I2C connector and a debug interface in the kit.

For native support for u-blox services, the XPLR-IOT-1 includes a trial of MQTT Anywhere, which operates at low power, communicating data between the device and the enterprise using the MQTT-SN (MQTT for sensor networks) protocol.

For commercial product development, designers working with XPLR-IOT-1 can use code from u-blox’s ubxlib GitHub repository, a library of software examples for key use cases, to speed up prototyping. Possible projects range from wireless sensor networks to indoor and outdoor tracking solutions to industrial or smart building gateways. All hardware design files, software, smartphone app and online dashboard source code are shared, allowing the XPLR-IOT-1 to also serve as a starting point for commercial end-product design.

The XPLR-IOT-1 will be available this month and will initially be sold via Digi-Key.