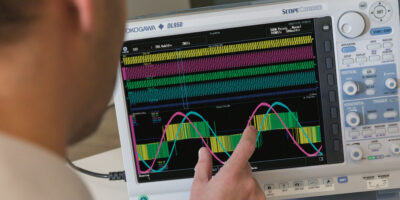 Flash acquisition and real-time computing functions have been added to the DL950 ScopeCorder by Yokogawa Test & Measurement.

The optional Flash memory feature makes the DL950 suitable for capturing data at high sample rates anywhere a PC would not be suitable, such as in a vehicle or at a remote site.

Applications for the acquisition feature could include recording control signals and temperature trends or vibrations simultaneously in small spaces, such as inside a car or a train. It can also be used for recording control signals or generated/consumed power in challenging environments, such as spaces near generators in a power plant or restricted volumes in a manufacturer’s factory. In these applications, the unit would usually need to be switched off before moving it to an office to save data on a PC.

The flash memory is non-volatile, so the captured data stays stored within the instrument even after turning off the power. The memory feature is available as an option on new purchases and can be purchased as a modification kit for retrofitting existing instruments.

There is also a new firmware version for the DL50 ScopeCorder. Features allow GPS data (e.g. time, latitude and longitude, altitude, velocity and direction) to be acquired with the existing/C35 option.

New attenuation ratios for both voltage and current probes are also included.