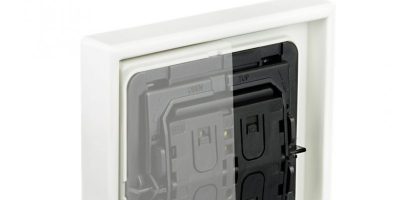 At this week’s Light+Building 2018 in Frankfurt, Germany (18th to 23rd March), ZF Friedrichshafen, will present what it believes is the world’s first wireless energy harvesting KNX light switch module that is configurable via ETS software tool (from ETS5).

Whether it is being used as a light switch, with or without dimming function, or as a shutter switch, the wireless light switch module is versatile and easy to integrate, says ZF. It has the ability to communicate without the need for a gateway, leading to many potential applications, e.g. flexible room partitions in buildings, glass walls, or even mounting directly on a lectern.

The KNX module is a self-sufficient and maintenance-free radio solution requiring no cabling and no batteries, adds ZF. In production now, the wireless light switch module is supplied ready to install. It is compatible with standard frames and panels for energy harvesting light switch modules and can also be combined with customer-specific designs and control panels.

The actuation of the unit produces enough electrical energy to transmit a complete KNX-RF protocol in S-mode directly to any KNX-receiver. A low actuation force and a low operation noise are further benefits of the new module, explains ZF.

The product range consists primarily of switch and sensor products previously sold under the Cherry brand, following ZF’s acquisition of the company in 2008.