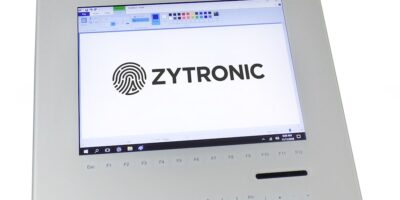 A configurable interface for rugged applications is provided by Zytronic, with the ZyBrid VK, a combination of a customised glass ZyBrid touch sensor and a Zytronic ZXY500 multi-touch controller that supports up to 100 independent touch points and rapid touch detection. Zytronic works closely with customers to design and manufacture projected capacitive user interfaces that combine a traditional dynamic touch area with surrounding capacitive keys.

ZyBrid VK is based on the company’s multi-touch capable, projected capacitive technology (MPCT) and is designed to enhance the design of human interface devices (HID).

Touchscreens provide an intuitive and flexible interface, but can incorporate a large display into a control panel which can add both cost and weight. Zytronic says ZyBrid VK solution allows a small touch display to be paired with non-mechanical printed and fixed keys in the same glass surface. An added benefit, says the company, is the creation of a seamless, completely sealable user interface, with no holes or gaps to trap dirt or allow liquid ingress.

Zytronic’s patented PCT technology will detect multiple simultaneous fingers, conductive styli and even gloved or dirty hands, through glass thicknesses of 10mm or more. It can be used indoors and outdoors as it is impervious to raindrops, leaves, dirt, ice and other debris that can affect the performance of other touch displays.

Zytronic is responsible for both the touchscreen manufacture and touch controller design and algorithm development. It has developed special firmware for the controller so that a dynamic touch sensing area can be defined alongside fixed key positions and even a “touch-pad”.

Working with customers, the company designs the touch interface, cuts the glass, which is printed and thermally toughened in-house. Zytronic’s electronics engineers customise the firmware according to the customer’s specifications, defining the key function and output protocol. The ZyBrid VK user interface design will enable touchscreens of any aspect ratio, to be combined with full keyboards, keypads, and other frequently used buttons, such as shortcuts to calculators, internet browsers or  maps.

The ZyBrid VK boots as a native HID keyboard, HID touchpad and HID touchscreen.  This allows keyboard functionality via the sensor at the boot level and once the desktop operating system has loaded. No drivers are required as it enumerates within multi-touch capable versions of Windows or Linux as native HID devices.

Suitable applications are any that may be subjected to vibration, shock and dirt from the operator’s hands, food processing and medical industries.