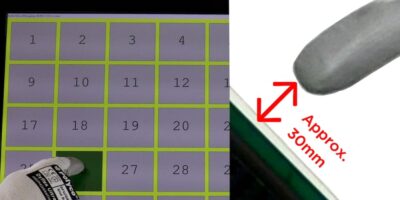 A third dimension to touch has been added by Zytronic to its ZyBrid hover technology. The contactless sensing option can detect user interactions up to 30mm away from the surface of the glass.

The UK developed ZyBrid technology is based on the company’s customisable ZyBrid touch sensors. ZyBrid hover has been designed to assist manufacturers of self-service kiosks to avoid user touching publicly used surfaces.

ZyBrid hover works in conjunction with Zytronic’s ZXY500 projected capacitive (PCAP) controller, which uses proprietary firmware to boost sensitivity levels far beyond what is normally possible. Used with a specially-designed touch sensor, the technology enables a significantly deeper touch-field to be generated, claims Zytronic. The multi-touch sensor can recognise basic gestures (such as zoom, pinch, and swipe) even when the user is wearing thick gloves. It can also be set to work in standard touch mode with direct user contact to the surface of the touchscreen.

Typically, to enable a touchscreen to detect an interaction without physical touch, infrared (IR) or camera-based touch detection hardware is mounted around the front edges of the screen. This can produce protruding bezels, which can harbour pathogens and make the screen difficult to clean effectively, says Zytronic. They are also susceptible to false or accidental touches, as they react to any object breaking the IR light beams or coming into the camera view, such as a sleeve or a falling leaf. Another detraction is that intense direct sunlight and dust or debris can accumulate on the surface to impede operation. PCAP touch technologies will only respond to a finger (sometimes gloved) or a conductive stylus, so they are far less prone to such performance issues.

Dr Andrew Morrison, technical director at Zytronic, explained “For ZyBrid hover, we deposit a proprietary copper matrix pattern on the rear of our touch sensors, and together with our ZXY500 controller and custom firmware, allows us to detect changes in the transferred energy from further than ever before. This means that touch events can be registered at least 30mm away from the surface of the screen, even from a gloved hand.”

Zytronic will advise developers of graphical user interfaces (GUI) to adapt their software to ensure an optimal user experience to reduce the risk of accidental touches when interacting with adjacent controls.