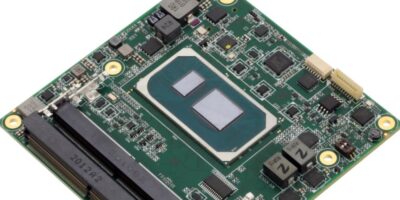 The 11th Generation Intel Core processors increase performance compared with the current industry standard 8th and 9th Generation processors and provide access to new technologies via the inclusion of the Intel Iris Xe graphics (Gen 12), PCIe 4.0, Thunderbolt 4, USB4, DDR4 and LPDDR4x memory, and Deep Learning Boost – depending on the processor.

Another two new products are based on the Intel Atom x6000E series processors and Intel Pentium and Celeron N and J series processors. The PICO-EHL4 brings these efficient processors to the PICO-ITX form factor. I/O includes four USB3.2 Gen 2 ports, two HDMI ports, and two Gigabit Ethernet LAN ports. Aaeon will also include these Intel processors in the UP Board range with the UP Squared Pro 2 (UPN-EHL01), featuring M.2 3042/3052 slot. This board is designed for 4G and 5G support.

“With the release of these two families of Intel processors, Aaeon will provide developers and users with a broader range of products to power applications from kiosks and digital displays, to edge computing IoT networks and AI applications,” said Kevin Chiu, vice president of Aaeon’s Embedded Computing division.

The company will also sell the Intel customer reference board for Intel Pentium and Celeron N and J series processors through its eShop.

Aaeon will release the computing platforms over the coming months.