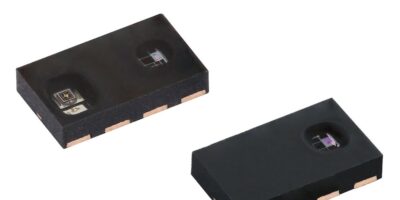 Two integrated automotive-grade proximity sensors with high resolution up to 20 micron for force sensing applications have been released by Vishay Intertechnology. Each combine a photodiode, amplifier and ADC circuitry in a 4.0 by 2.36mm surface mount package with a low 0.75mm profile. The VCNL3030X01 features an on-board infrared emitter (IRED) while the VCNL3036X01 is designed to be used with up to three external IREDs, for which an on-board driver with internal logic is provided.

They are intended for use in automotive, consumer, smart home, industrial, office products and toys. The AEC-Q101-qualified devices provide higher resolution compared to previous generation sensors at a lower cost, says Vishay Intertechnology. The VCNL3030X01 and VCNL3036X01 can be used for force sensing applications in steering wheel controls, laptop smart power buttons and multi-force trackpads, and touchpads for IoT devices and kitchen appliances. The sensors prevent false triggers and even allow users to wear gloves, advises Vishay. The VCNL3036X01 is designed to work with external IREDs, for increased flexibility for product design.

Both VCNL3030X01 and VCNL3036X01 sensors support the I²C bus communication interface and the programmable interrupt function allows designers to specify high and low thresholds, which reduces the continuous communication with the microcontroller. The proximity sensors have selectable 12-bit and 16-bit outputs, and use intelligent cancellation to eliminate crosstalk. There is also a smart persistence scheme which ensures accurate sensing and faster response time. The VCNL3030X01’s emitter wavelength peaks at 940nm and has no visible ‘red-tail’, says Vishay.

The VCNL3030X01 and VCNL3036X01 have an IRED / LED pulse current of 200mA, a supply voltage range of 2.5 to 3.6V and an I²C bus voltage range from 1.8 to 5.5V. For force sensing applications, the sensors offer the flexibility to fine-tune the current for short displacements.

The devices are RoHS-compliant, halogen-free, and Vishay Green.

The VCNL3030X01 and VCNL3036X01 proximity sensors are sampling now and available in production quantities with lead times of six to 12 weeks for large orders.