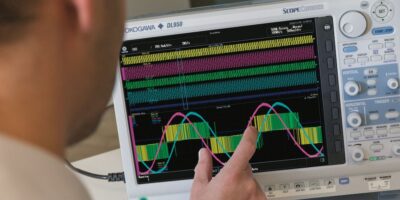 With energy efficiency and renewables firmly in mind, Yokogawa Test & Measurement has boosted its ScopeCorder portable multi-channel data-acquisition recorder range with the DL950. The new instrument is designed to offer manufacturers a detailed view of an application’s electrical behaviour.

Providing the high-speed sampling and signal fidelity of an oscilloscope and the long-term data recording capabilities of a recorder, the DL950 measures signals at a high bit resolution while securing data in harsh environments such as in renewable energy systems. Combined with Yokogawa’s power analyser and 8-channel oscilloscope, developers can analyse the behaviour of solutions such as power grids, generators and power conditioners.

Building on the capabilities of the DL850E, the DL950 ScopeCorder can handle larger amounts of data at a faster sample rate and with a longer recording time. It has an acquisition memory up to 8 Gpoint, and a 200 MS/s sample rate at 14-bit, compared with the DL850E’s 100 MS/s at 12-bit. Twice the sample rate but with more detail.

The DL950 can run up to 32 isolated analogue channels with 10 MS/s at 16-bit or up to 128 digital channels. It captures and analyses a variety of electrical signals, mechanical performance parameters indicated by sensors and decoded serial bus signals.

Data can be captured to a PC streaming over a long period of time at up to 160 MB/s, with data volumes limited only by the PC’s storage size. Using 10 Gigabit Ethernet, data can be transferred from the DL950 to a PC at 50 times the speed of its predecessor. A fibre optic cord and the Yokogawa’s IS8000 PC software are used for transmission.

The DL950 will also feature Flash Acquisition (coming soon), used to store data when a PC cannot be used, for example when capturing data from a power plant or other similar application. In these applications the unit would usually need to be switched off before moving it to an office to save data on a PC. Using Flash Acquisition, data can be captured over a long time with a high-speed sample rate of 20 MS/s (8CH) and 10 MS/s (16CH).