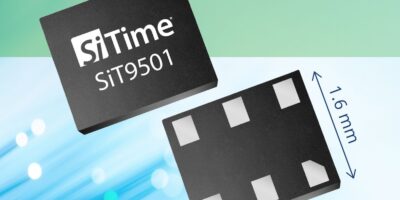 The SiT9501 oscillator is intended for use in 100 to 800G optical modules. It is supplied in a 2.0 x 1.6mm package to achieve up to 50 per cent space savings, although other industry standard packages. The device’s smaller size allows customers to integrate more features and reduce development time, adds SiTime.

SiTime claims the SiT9501 differential oscillator offers the lowest jitter in the presence of environmental stressors, and the smallest size.

It operates over popular networking frequencies from 25 to 644.53125MHz with

70 femtoseconds of RMS phase jitter. It has a wide operating temperature range of -40 to +105 degrees C.

There are on-chip voltage regulators to filter power-supply noise, to enhance power integrity for module designs, says SiTime, together with FlexSwing driver which reduces power consumption by 30 per cent. It also integrates source-bias LVPECL resistors.

The SiT9501 can be used for high-performance applications, such as data centre switches, telecomms routers, edge servers, artificial intelligence (AI) or graphics cards and storage controllers in addition to optical modules for outdoor 5G deployment.

According to Rajesh Vashist, CEO of SiTime, this third generation MEMS delivers up to seven times better phase noise at half the power. “The SiT9501 is the first of many products to use this technology. . . In space-constrained applications, such as optical modules, the SiT9501 delivers an unmatched combination of higher performance and smaller size,” he said.

Outdoor 5G infrastructure is subject to environmental stressors such as high-temperature, vibration and airflow that can degrade throughput. Increased data rates and potential environmental stressors, contribute to shrink timing margins which requires lower jitter oscillators to ensure the same quality of service.

In optical modules, a third of the PCB area is consumed by the optical sub-assembly, leaving little room for data processing electronics. This also makes a small form factor, a critical factor in oscillator selection.

The SiT9501 oscillator is sampling now. Production quantities are planned to be available in Q1 2021.