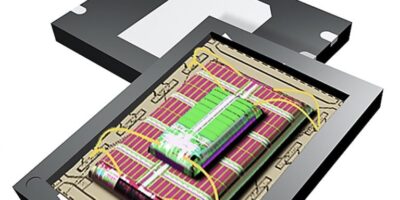 At this week’s Flash Memory Summit in Santa Clara, California, USA, Winbond is highlighting the SpiStack dual-die NOR+NAND code storage device, which has been included on NXP Semiconductors’ FRWY-LS1012A board for use with its Layerscape LS1012A communications processor.

The W25M161AW SpiStack is used on the FRWY-LS1012A development board for the LS1012A processor. The memory provides 16Mbits of serial NOR flash memory for the board’s boot code, and 1Gbit of serial NAND for its Linux operating system.

Visitors to the Winbond booth will see SpiStack running on the FRWY-LS1012A board. The stacked-die construction and the Winbond software Chip Select capability enables a serial NOR Flash die for fast boot and a serial NAND die for high memory density to be accommodated in an eight-terminal WSON package with a standard 8.0 x 6.0mm footprint and pin-out.

Visitors will also see demonstration systems exhibiting what is claimed to be the industry’s best read performance of its W25N01JW serial NAND device. The W25N01JW offers a high data-transfer rate of 83Mbyte per second via a quad serial peripheral interface (QSPI).

The high-speed read operation is up to four times faster than existing serial NAND memory devices, explains Winbond, enabling the W25N01JW to replace SPI NOR flash memory in automotive applications such as data storage for instrument clusters or the central information display. It is intended to meet the need for automotive OEMs to introduce more sophisticated graphics displays in the instrument cluster, and larger display sizes of seven inches and above in vehicles’ instrument displays. System memory requirements can be 1Gbit and above. At these capacities, serial NAND flash has a lower unit cost than SPI NOR flash, says Winbond. It also occupies a smaller board area per Mbit of storage capacity.

Both the W25M161AW and W25N01JW are available now in production volumes.